Body, Brains and Bliss! As an Orthopod, I began coaching my patients to change their bodies through fitness in order to save their mobility, a key factor

As an Orthopod, I began coaching my patients to change their bodies through fitness in order to save their mobility, a key factor in remaining vital and active. What I have learned, however, is that we are not only saving mobility but saving lives!

Taking control of our physical bodies is more than looking good in the “little black dress.”

It is about our bodies, our brains and bliss.

Our Bodies- Linda’s story:
One of my main messages to patients is that no matter where you are starting, how old you are or how long it has been since you stepped away from the couch….there is NEVER a time when our bodies will not heal themselves using the tool of exercise.

One of my favorite patients, Linda, has an amazing story.

Linda first came to me in her early 50’s because she saw the writing on the wall. He grandmother had died at 62 and her mother at 61 of heart disease and diabetes. She was overweight, had high blood pressure and had not exercised in years. Linda saw herself was rapidly approaching the same future as her mother. She decided to invest in her physical future and begin exercising in one of my classes for “former couch potatoes.” She met with us twice a week initially and has worked so hard. After the first six months she had lost 40 pounds, was no longer on high blood pressure medication and was no longer pre-diabetic for the first time in 10 years. I am so proud of her and tell her story all the time.

Our Brains- Vonda’s story:
Exercise turns on our thinking caps and rejuvenates our brains.

I was sitting in a research meeting several months ago where scientists were discussing the real connections between our bodies and brains. They showed me brain scans with different areas lighting up with activity. I was so amazed to learn that the same areas that are highly active during physical exercise are those that are highly active during complex thinking. Exercise literally turns on our “thinking cap.”

I know this is true from personal experience. Everytime I run , the rapid fire ideas, plans, problems that swirl around in my head waiting to be solved, suddenly fall into line. It is as if the drum beat of my feet on the pavement is a “problem-solving” cadence. I get so much work done in my head while I’m working my body. 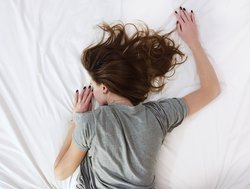 Sleep Is One Of The Best Remedies For Healthy Aging